The Insta-Set Clock - Named For Its Worst Feature

My wife and I had a minor problem. It's one of those problems we acknowledged, but let linger for a long time. Whenever we were in the living room and wanted to know the time, we couldn't find a convenient clock. Sure, there is the clock on our PVR and a clock on my computer and clocks built right into our phones. Each of these required a small inconvenience as the time was not immediately visible and available. Several times we discussed how we needed to buy a new wall clock.


One evening a few months ago, we were in London Drugs and happened to pass by a shelf full of wall clocks. Since we were not in a hurry, we paused to browse through them. The most important criteria for choosing a clock, we decided, were aesthetics and volume. i.e. We wanted to make sure it looked good and that it was very quiet. Since all the clocks were turned off, we could only choose based on appearance. We decided that we would return the clock if it was too loud. 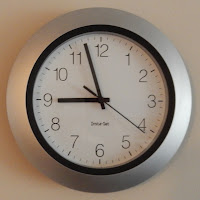 Based on its clean and easy-to-read style, we chose the Accu-Time Insta-Set Clock. Reading the packaging, we learned that it has another interesting feature we had not considered. The packaging explained that when you turn the clock on, it will automatically set itself to the correct time. It is also smart enough to automatically adjust itself for daylight savings time. All the more reason to give it a try, I thought.


By the time I got around to trying out our new purchase it was about 9:45pm. Being a stereotypical male, I dove right in without reading the instructions. I set the clock to a few minutes before the current time and was excited to see it set itself to the correct time automatically. The second hand started flying around the face and the minute hand progressed towards the correct minute - so far, so good. The only problem was that the flying hands didn't stop when they reached the correct time. Instead, they kept flying forward giving me the sensation that I was in some kind of time-travelling B-movie scene.


After trying and failing again, I finally conceded that I would have to read the instruction manual. The instruction manual informed me (among other details) that I would have to move the clock hands back to the midnight position and let the clock set itself from there. The only problem with this was that during the "Insta-Set" process, the second hand goes fully around the face about once every 5 seconds. This means that setting the clock at about 10:00pm requires it to go around 10 x 60 = 600 times. All told, setting the clock correctly for the first time took nearly an hour. This is a new definition of 'instant' that I was not previously aware of.


After our initial trouble getting the clock up and running, I am pleased to say that we are now very happy with it. It runs nearly silently and has kept accurate time for a few months. As of this morning (March 10, 2013) I am also pleased to report that it correctly adjusted itself for daylight savings time. I would recommend buying this great little clock to anyone. Just don't get it if you need a clock that actually sets itself instantly.

Joshua Ganes
Vancouver, British Columbia, Canada
I am a software developer by trade. I'm passionate about building intuitive, high-quality software and solving complex problems with elegant solutions. I live in beautiful Vancouver, BC with my wife, Jenny, and two daughters, Amber, and Isla. I enjoy hiking (http://bctrek.blogspot.ca/) and blading around the Stanley Park seawall and cycling around False Creek.